Anyone who’s not on board for some woo-woo hippie bullshit, here’s your warning. You might wanna skip this one; I feel like I’m taking a leap here.

(Or you’re always welcome to read along anyway, rolling your eyes and making fun as necessary. Just sayin’. I told ya, I’m full of it..)

I think I come by my skepticism fairly naturally; my dad’s a practical get-the-facts kind of guy, and my mom has never gotten the metaphorical meaning of a poem in her life. Religion was never a big thing in our house, and while we did do the Santa Claus/Easter Bunny/Tooth Fairy thing, once I started to question it, they never tried to prolong the charade. We travelled, and I got to see both luxurious and destitute places in the world. If I asked a tough question, my parents would give me a real answer – or as close to one as they could -, rather than the glossed-over, everything’s-hunky-dory answer that kids are so often given. I’d like to think I was raised with a pretty realistic and rational mindset about things.

So, of course, the more spiritual side of yoga is a struggle for me. I’ve said before how my attention wavers during meditation, and how weird I feel about chanting (have I mentioned that? I feel the same way about singing in a choir or saying the pledge of allegiance/Canadian equivalent of that – it feels uncomfortable and cult-ish. Yick.). For the majority of my yoga journey so far, I didn’t even dip a toe into the deeper, more spiritual aspects of yoga. Being such a skeptic, what was the point? I’ll believe it when I see it, right? 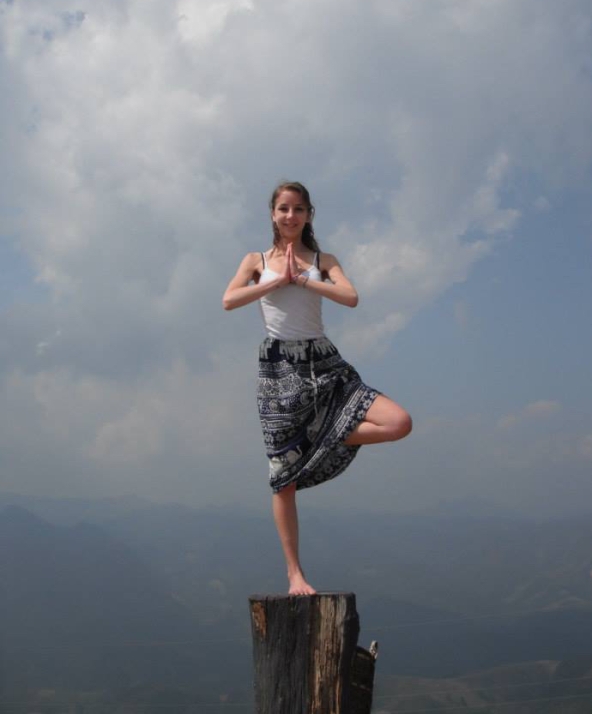 It might actually be one of those things where you’ll see it when you believe it.

I’ve been trying (again) to give meditation a chance. I’ve downloaded apps like Headspace before, and listened to guided meditations (both recorded on youtube and read by a teacher during class), and it just hasn’t worked. For a while I just gave up on it and decided nope, just not a meditate-y kinda girl. But I kept coming across articles about the benefits of meditation, and a friend kept mentioning how rewarding her own practice felt, and I decided it was time to give it another shot. Worst that can come of it, I waste a few minutes a day. Big whoop; I likely would have spent that time scrolling through Instagram anyway.

So, for the past week or so, I’ve been trying – dedicating a few minutes of my morning routine to my meditation practice. (Calling it a practice might be a big aspirational at this point – it’s more of a struggley effort, but whatever.) I’ll set the timer on my phone (I’m up to a five-minute chunk of time now!), and sit on my yoga mat in lotus pose. Lotus, because it forces me to sit up a lil straighter, and be less likely to fidget. Hands just resting wherever, and I’ll begin to notice my breath.

Inhale. Exhale. Inhale. Exhale. I try to focus on those two words, despite the constant jabber of my mind in the background – feeling almost like a tired mother of over-active children: “not right now, guys, Mommy’s busy“. I’ll try to keep my thoughts this simple for the entirety of my set timer, but I find that near the end of it my brain’s getting sick of my games. So, to give my brain a task, I’ve added setting intentions to my silent time. It sounds stupid, but so far it’s been feeling really positive. As I think ahead to each portion of the day in front of me, I try to picture how I want it to play out, and how I’ll feel when it becomes reality. I imagine the day going according to the things and thoughts and realities I manifest right there on my mat. Whether or not it actually makes a difference (. oops, skeptic), it feels positive and empowering to decide in the morning, “it’s going to be a good day”.

“It’s going to be a good day” – and nothing’s stopping it. In my mind I picture a yellow aura surrounding me, refracting any negativity or bullcrap that the day tries to throw at me. Unpleasant people can’t get at me through that good-vibes forcefield. It sounds silly, I know, but I am finding that it helps when someone is coming ThisClose to my last nerve to picture that yellow energy bouncing them away. Nope, not today, asshole!

Obviously I’m too new into this to have any profound wisdom on the practice of meditation, or to cite umpteen ways in which my life has improved. But the point is – I’m being open to it. I’m trying. I want to learn more, and get better at connecting with my own spiritual self. Even if it’s nothing more than “having a positive attitude”, or five minutes of proper breathing each morning, it’s doing me some good at least.

I’ll let you know if I have any ~major breakthroughs~. Maybe I’m just wasting time. I dunno. Anyone have any proclamations of the magic of meditation to share with me??